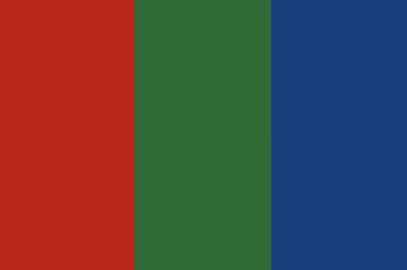 During the Haughton-Mars Project (HMP)'s 1998 summer field campaign on Devon Island in the Arctic, I proposed a design for a Flag of Mars. The idea of a flag for Mars came up in a casual conversation. As I grew up in France, I jokingly suggested that it should be a tricolour, to symbolize Liberty, with Red, Green and Blue representing the future phases of terraforming Mars. I'm actually not a big fan of terraforming. I don't think it's cost-effective given how much resources and time it would take, let alone the ethics of it in case we do find indigenous alien life on Mars. Instead, to live on other Earth-like worlds, we should try to achieve interstellar travel. That said, on astronomical timescales, as our Sun evolves to become a red giant, Mars will eventually undergo terraforming anyway, so the tricolor evolution of Mars might still symbolize the planet's future. To my surprise, the tricolor flag idea caught on, and this flag now shows up here and there around the world as "the" Flag of Mars. It has even flown in space. In December 1999, astronaut John Grunsfeld carried this Flag of Mars with him aboard Space Shuttle Discovery on NASA's  STS-103 mission.

The Flag of Mars has no official standing. It is not intended to represent a territorial claim, nor to encourage future humans on Mars to sucede from Earth. While it is inspired in part by the terraforming sequence, human-induced or natural, it is not intended to advocate terraforming. To me, it is more a symbol of humanity's quest to explore Mars, and of the wonderful future Mars might have, especially when the Sun becomes a red giant, which it will. When humans explore Mars, or if they ever live there, I hope they will do so ethically and esthetically. Otherwise, don't fly "my" Flag of Mars.

The Flag of Mars may be flown or worn anywhere anytime on Earth, on Mars, or in SpaceTime. Be respectful of local customs. Exercise good judgment for appropriateness. The Flag of Mars may be burned if you are really out of fuel and happen to be in an oxygen-rich atmosphere, and especially if you ever need to signal your presence in a vast barren desert.

The proportions of the Flag of Mars are 2:3. In the Pantone Color Matching System (PCMS), the red should be the "Red Clay" 18-1454, the green the "Mint Green" 17-6333, and the blue the "Imperial Blue" 19-4245. Note: Pantone has red colors called "Mars Red" and "High Risk Red", but these appeared too dark and dull to me. The Pantone "Red Clay" is more orange and brown. It got my vote. Given the abundance of clays on Mars, "Red Clay" was also a good fit. The Pantone "Mint Green" seemed refreshingly primordial to me. It's more "algal" than other greens. The Pantone "Imperial Blue" also felt right for blue. It is perhaps ironic that a celebration of Exploration and Liberty would end with Imperial Blue. But oh well, I thought it looked nice.