I have been designing posters since I was a kid, starting with posters for my boarding school fair in France. 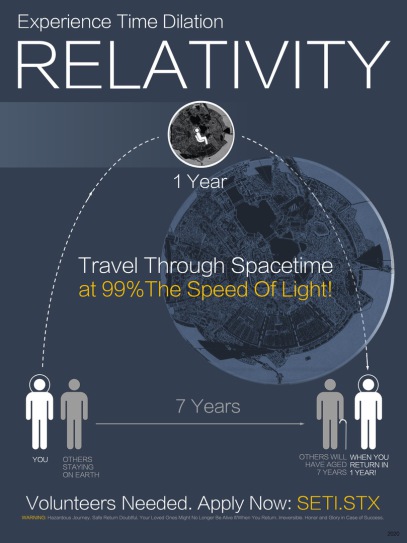 This poster is an imaginary call for volunteers to experience relativistic time dilation between a future space traveler who would approach the speed of light, c, and his/her fellow humans who would stay behind on Earth.

According to Einstein’s Theory of Relativity, travel at or faster than the speed of light is not physically possible, as mass would become infinite and time would stop. But it remains conceivable for us to approach the speed of light while remaining below it, and begin to experience drastic time dilation.

By accelerating to, and journeying at, 99% of the speed of light (0.99c), time will dilate approximately seven-fold. An astronaut spending one year at such a speed would return home to find his or her twin sibling, and everybody else who stayed on Earth, aged 7 years. This consequence of travel at high relativistic speeds is known in physics as the Twin Paradox.

Achieving the required high relativistic speeds is currently beyond our human civilization’s technological capability, but I wanted to imagine the day when we might create the first 0.99c spacetime transport, and would look for brave volunteers - chrononauts - to try it out.

SETI.STX is an imaginary url in which SETI would stand for my home institution, SETI Institute, and STX would mean SpaceTime Exploration.

The warning in small print at the bottom of the poster says:

"WARNING: Hazardous Journey. Safe Return Doubtful. Your Loved Ones Might No Longer Be Alive If/When You Return. Irreversible. Honor And Glory In Case Of Success."

The original digital file is available as an NFT here.