Here are some of my paintings relating to Mars, displayed in reverse chronological order of creation. Click on any one for a larger view. 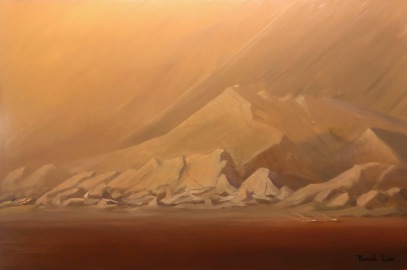 We left Ius Chasma early in hopes of reaching Oudemans by nightfall. 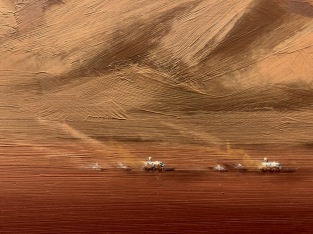 As we reached the edge of the plateau, I was struck by a feeling of déjà vu. Chesley Bonestell had, in 1956, imagined and painted a similar scene already.

"Exploring Mars" by Chesley Bonestell first appeared in the 1956 book "The Exploration of Mars" by Willy Ley and Wernher Von Braun with paintings by Chesley Bonestell. The caption read: "The ground station had been set up on Mars, and the explorers are beginning to investigate the vicinity of the landing site". The original painting, an oil on board (14 1/2 x 28 1/2 inches), is now in the permanent collection of the National Air & Space Museum in Washington, D.C.

In painting this new "Exploring Mars", I wanted to pay tribute to the grand master of space art and his creation of an iconic classic, but also update elements of the landscape and hardware in light of new knowledge gained about Mars in the intervening 65 years and evolutions in our thinking about future Mars exploration systems and human surface operations.

A number of differences between the1956 and 2021 "Exploring Mars" are detailed below. 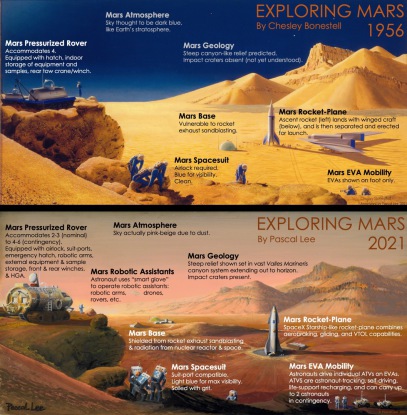 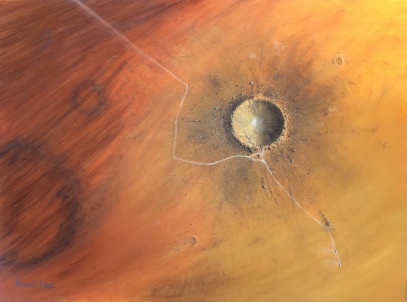 We stopped by this little fresh crater in Utopia and EVA'd by ATV to the rim.

This painting depicts two pressurized rovers, each escorted by two smaller robotic ATVs (All-Terrain Vehicles), traversing the Martian landscape (see detail below). This concept of operation stems from the field lessons my teammates and I have learned over the years on the NASA HMP (Haughton-Mars Project) on Devon Island in the Arctic. 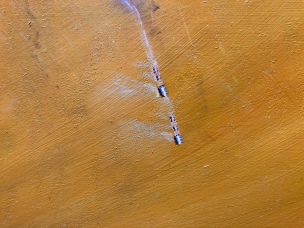 Firstly, pressurized rovers should always go out on traverses in at least pairs, so that one rover may rescue the other if one rover becomes immobilized. The lead pressurized rover normally serves as the exploration vehicle, while the second rover focuses on logistical and safety support, for instance comms relay. The second rover will minimize risk by following in the exact path blazed by the first rover, provided it proves safe of course.

Secondly, the ATVs serve as self-driving robotic scouts and also as drivable unpressurized individual astronaut transports once a region of interest (ROI) is reached and local short-range (< 2km) EVAs are needed. Each ATV is a mobile PLSS (Portable Life Support System) and remains in close proximity to the astronaut it is assigned to during EVAs. This allows the Mars astronaut's spacesuit to carry less oxygen and smaller batteries, thus helping make the suit as light as possible. The ATVs may also be positioned to serve as comms relays. In a contingency, each ATV can carry two astronauts.

In this painting, wide trails show where the column of vehicles went. As the column approached the crater, the explorers first rounded the rougher parts of the ejecta blanket and drove by a few large distal ejecta blocks. Then, a smoother approach path was taken to get closer to the crater's rim. The pressurized rovers were parked shy of the rim itself, and the astronauts went on EVA, taking ATVs to reach the rim crest and eventually back to their pressurized rovers. They created tighter ATV trails in the process.

The dark circles to the left are where I left my coffee pot and coffee mug. Just kidding! They are "palimpsests", heavily eroded older craters reduced to barely visible scars in the landscape. 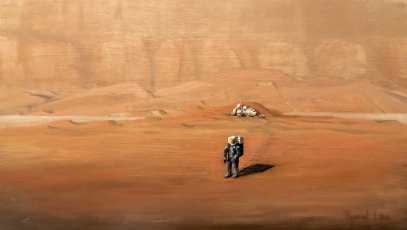 The Mars astronauts should have known better not to go out in just one pressurized rover. But complacency had set in, and now they were left wondering if the second rover would rescue them in time. 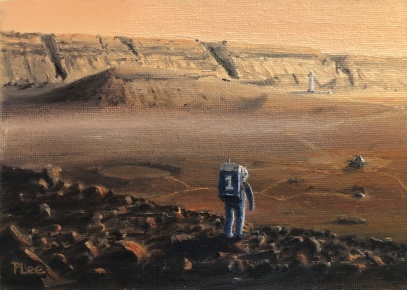 As late afternoon fog rolls in, the commander of an early Mars base pauses to look at the Martian landscape and the base's installations on the vast canyon floor. Who will he or she be?...

The nuclear powerplant in the foreground is located some distance away from the base, behind a large rocky outcrop, to shield the base from the reactor's radiation.

In the distance, a SpaceX Starship stands at the newly established launch and landing pad. The pad is located a few kilometers away from the base and beyond a hill to protect the base from rocket exhaust sandblasting during Starship liftoffs and landings. 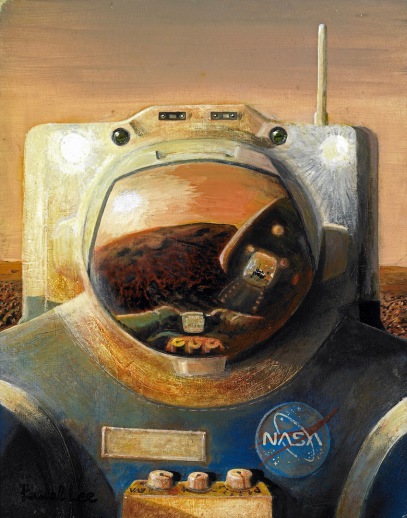 A Mars astronaut returns to base by ATV (All-Terrain Vehicle) at the end of a long day of gritty fieldwork. Name tag left blank. Who will he or she be?... 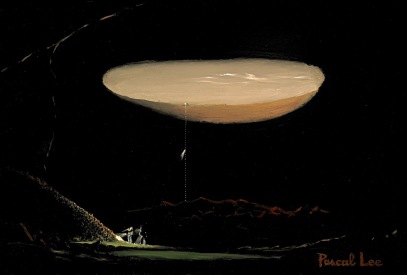 Astronauts explore a large pit crater on Mars and discover what might be extant life in ice at the edge of an underground rock glacier. Based on the Jeanne Pit on Arsia Mons, Mars, and our journey into Lofthellir Lava Tube Ice Cave, Iceland. 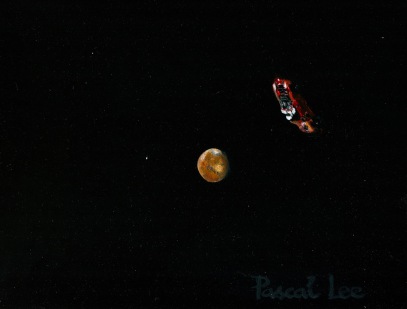 A TESLA ROADSTER DRIFTS BY MARS

Some time in the distant future, Starman in his Tesla Roadster, bleached by radiation and dinged with a few impact craters, tumbles past Mars in the silence of deep space. 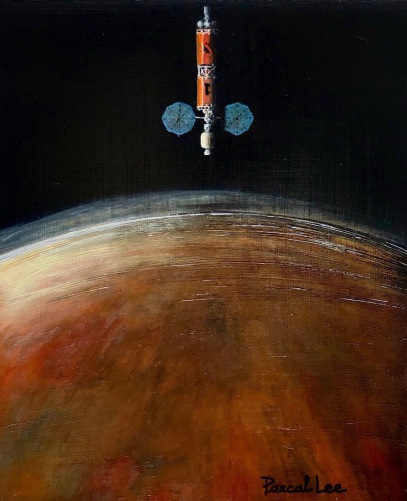 Painting depicting a Mars Transfer Vehicle (MTV) in orbit above Mars, stabilized by gravity gradient. By pointing its long axis towards Mars, the MTV is able to remain stably parked in Mars orbit and save on attitude control fuel. 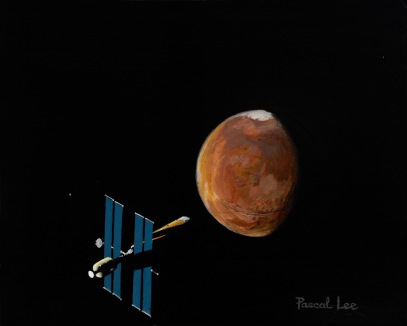 Painting depicting a Mars Transfer Vehicle arriving at the Red Planet, with its two small moons, Phobos and Deimos, in view. The Noctis Landing human landing site at the west end of Valles Marineris is also in sight. 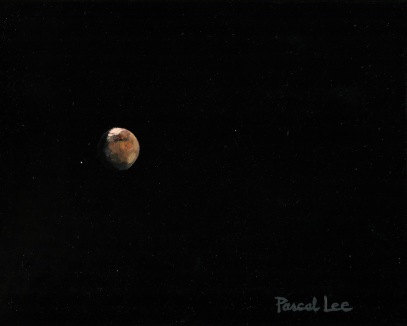 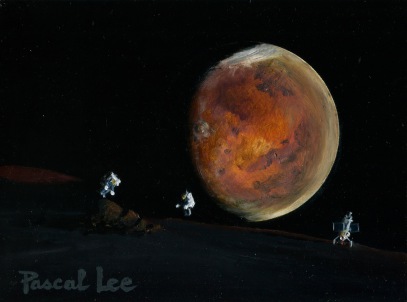 HUMAN EXPLORATION OF DEIMOS - VENTURING OUT

Painting depicting the human exploration of Mars' outer moon, Deimos. Astronauts use jetpacks to examine a boulder near the North Pole of Deimos. 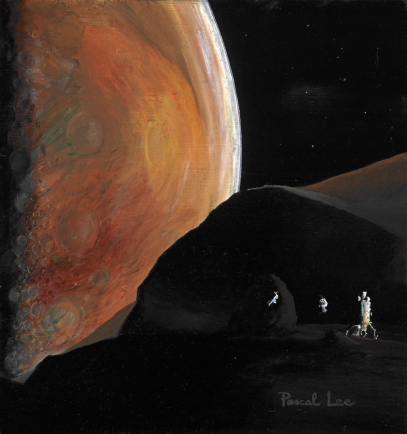 HUMAN EXPLORATION OF PHOBOS - ON THE RIM OF LIMTOC

Painting depicting the human exploration of Mars' inner moon, Phobos. Astronauts use jetpacks to examine a giant boulder on the rim of Limtoc Crater in Stickney Crater on Phobos.

Painting commissioned as cover art for the sci-fi novel "The Greater Good" by Scott N. Giarman. 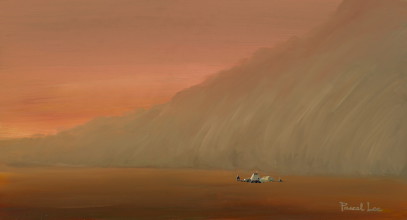 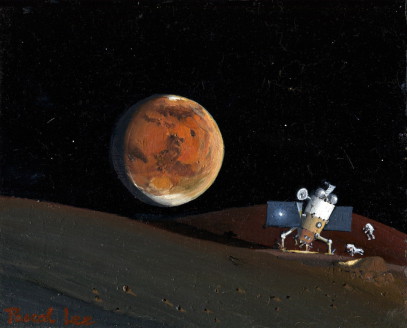 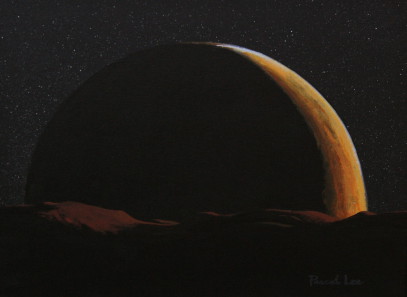 Painting depicting a view of Mars from the North Pole of the planet's dark inner moon, Phobos. 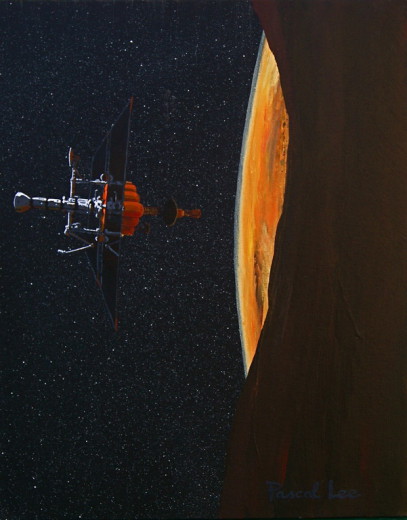 Painting depicting a hybrid nuclear and solar powered spacecraft in orbit around Mars, as seen from its inner moon, Phobos. 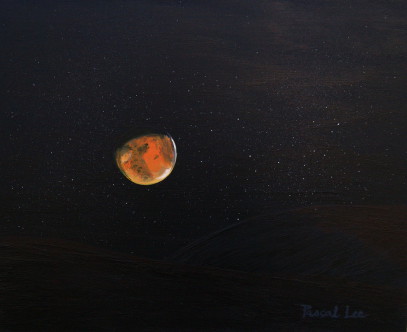 Painting depicting Mars as seen from the dark surface of its outer moon, Deimos. 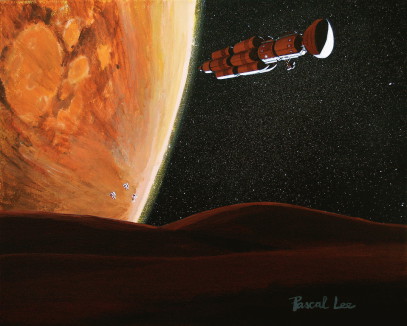 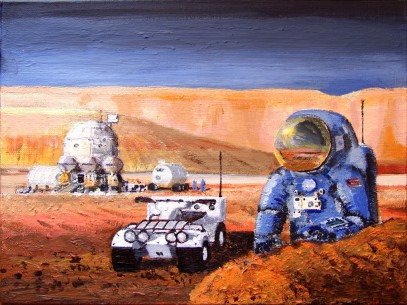 Painting depicting a human mission to Valles Marineris on Mars and the use of a pressurized rover and all-terrain vehicles (ATVs) as surface mobility systems. 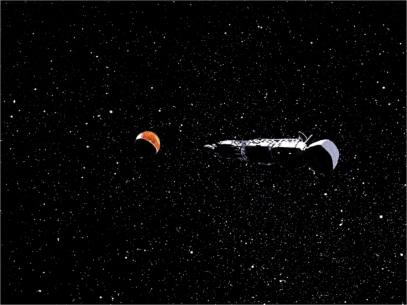 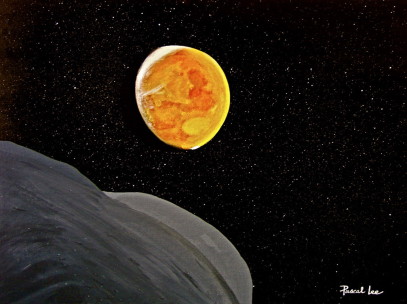 Painting depicting Mars as seen from the vicinity of its outer moon, Deimos. 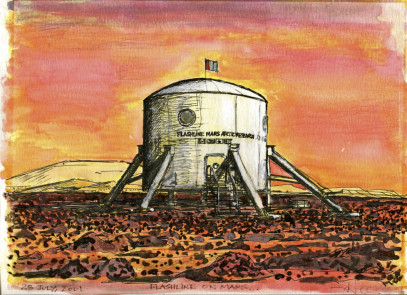 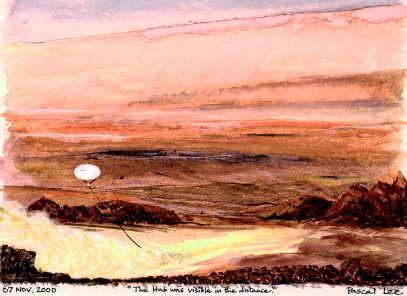 THE HAB WAS VISIBLE IN THE DISTANCE

Painting depicting a pressurized rover equipped with a tethered balloon returning to the expedition's habitat on the floor of Valles Marineris on Mars.