Here are some of my paintings relating to the Poles, Glaciers, and Ice, displayed in reverse chronological order of creation. Click on any one for a larger view. 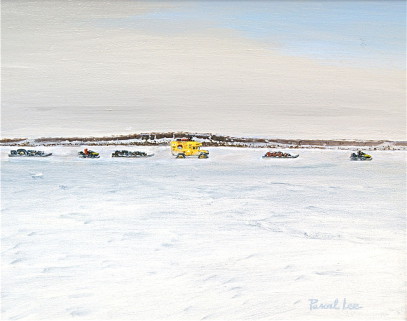 This is a painting of one of my favorite moments of the Northwest Passage Drive Expedition, which I led. We are passing the Jameson Islands, with their spectacular cliffs of dark basalt, in Coronation Gulf, on 14 April 2009.

Joe Amarualik, our scout, was riding in the lead snowmobile, looking for the best possible path through hummocky ice. John Schutt and I rode in HMP Okarian, our yellow Humvee. Jesse Weaver, our engineer, closed the column, making sure the sea-ice around Okarian was holding up. 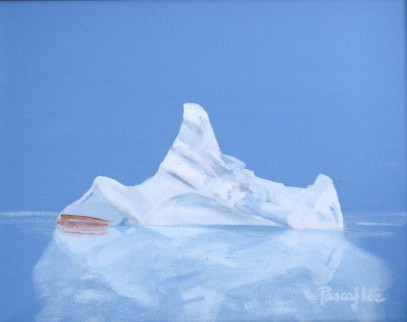 THE ICEBERG THAT SANK THE TITANIC 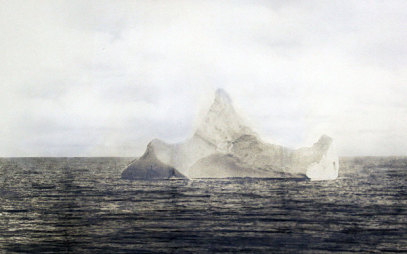 B&W PHOTO OF TITANIC ICEBERG DESCRIBED AS HAVING RED SCRAPING

M. Linoenewald, chief steward on the German liner SS Prinz Adalbert that passed the disaster scene on the morning of April 15, 1912, took this photograph of the iceberg which my painting is based on. Titanic sank at 2.20am earlier that same day. Linoenewald wrote in a signed note: "On the day after the sinking of the Titanic, the steamer Prinz Adalbert passed the iceberg shown in this photograph. The Titanic disaster was not yet known by us. On one side red paint was plainly visible, which has the appearance of having been made by the scraping of a vessel on the iceberg. SS Prinz Adalbert Hamburg America Line."

This photograph was first published in Walter Lord's classic book A Night To Remember, and is considered to show the actual iceberg encountered by Titanic. The note, however, had not been widely seen until Burlingham, Montgomery & Beecher, the law firm that acted for White Star Line which owned Titanic, and had both the original photograph and signed note by Linoenewald hanging in the firm's boardroom, went out of business in 2002. The two items were eventually put up for auction as one lot with auctioneers Henry Aldridge and Son of Devizes, Wilts, in 2015. The lot sold for $32,000 on Oct 24, 2015. 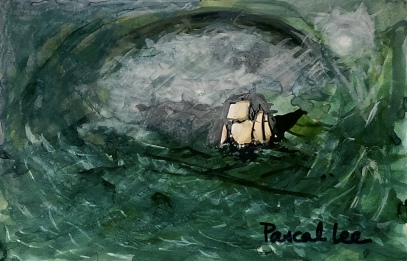 I made this painting of HMS Resolute adrift at sea in an Arctic storm many years before I knew I would travel to the Arctic, let alone to Resolute Bay, the northern hamlet named after this ship.< New image with text >>